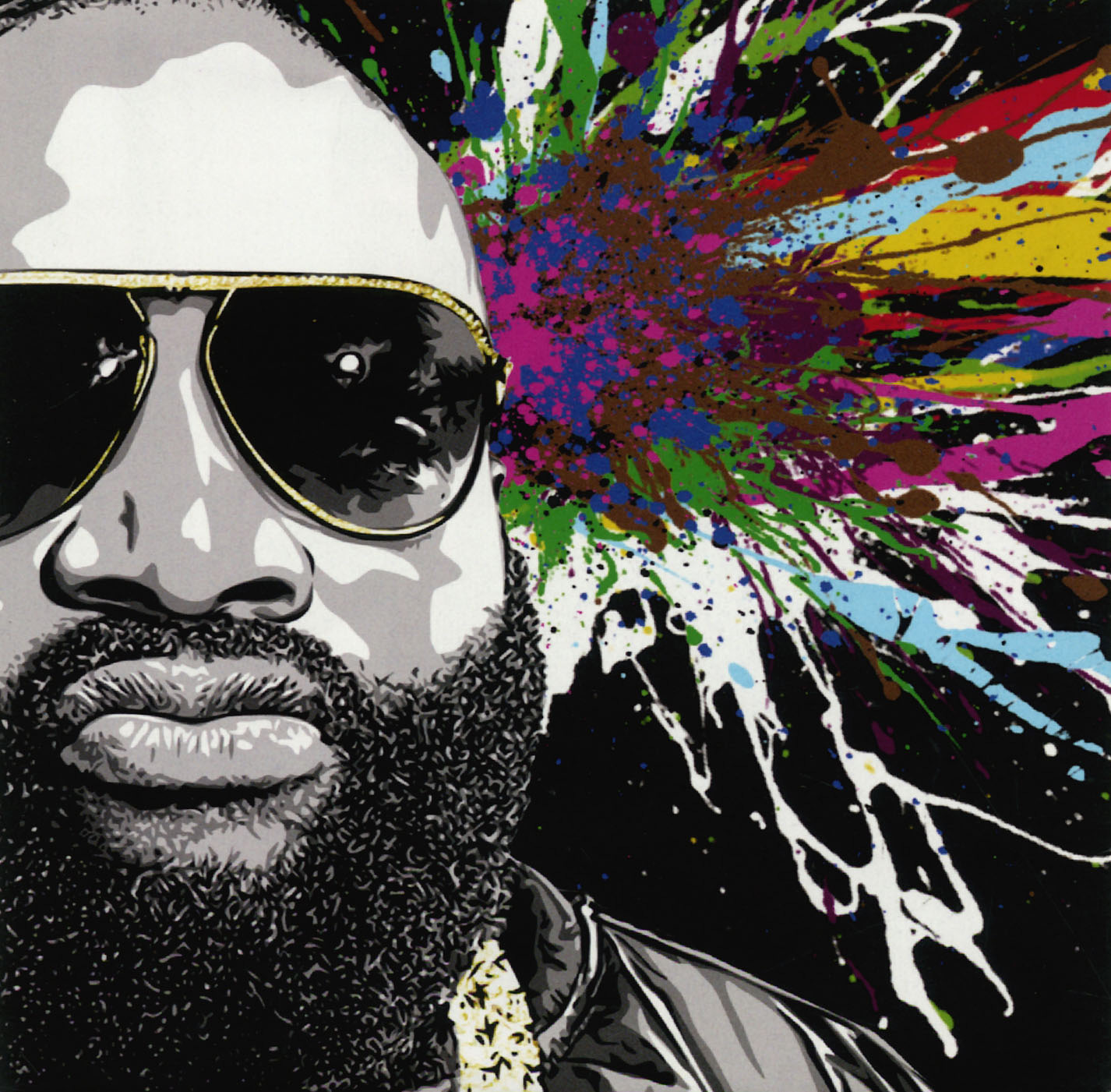 Some factual stuff on the self-proclaimed Teflon Don: He goes punchline for punchline – some serious, some catchy, and some horrid; going one liner after one liner, he also has a bad habit of resorting to shout-outs when he is drawing thin on new ideas or lacking imagination on what his next grubbing will consist of [and how a girl will be involved in there somewhere too, the snack].  Rick Ross has done well for himself, from holding the reigns to the Maybach Music Group since its birth, to consistently upholding to a certain standard when it comes to what avid MMG style hip-hop fans expect.  For years, his lyrical diameters have proven to be taxing.  Previous projects have him at the teeth, quick punches that surface and dissolve like knock-knock jokes, puns that truly challenge the audience, I.e. “BLK & WHT” hook “my nigga black but he selling white”.  With newest/sixth LP Mastermind we now have another album that truly displays what all a Rick Ross project should be expected to entail.

Elaborate and epic horn loops are present and often; as are the high hats that partner the deeply non-evolved, repetitious bass lines of MMG’s version of trap.  There are plenty of pretentious and obnoxiously exaggerated interludes that prove irrelevant, partnered by patience-testing intros on damn near every track.  But that’s MMG, they even remind you every other track with the anonymous sexy voice speaking that familiarly trademarked “Maybach Music”.  But despite all of these things, Rick Ross possesses a certain attractive quality with his strong-as-oak delivery and a confident presence that slimly falters.

Co-starred by Jay-Z, “The Devil is a Lie” wears its own horn loop [the fuck] out in a heartbeat.  Hova comes in at three minutes and tries his best to save it, puts onto display a nasty feature verse but the issue still remains with our supposed leader here.  As he grunts through the hook, things could surely only move up from here.  That is until the silence is broken by the opening “turn-up-trumpet” of “Mafia Music III”, where Ross includes this brilliant next line in verse one of the track- “sweet potato pie, oh me oh my”.  Do your best not to skip the close-to three minute “Dope Bitch” skit, where two girls discuss how they choose to wash their hair with champagne instead of shampoo.  Thank you Rozay, it truly was the cohesiveness and intellectuality of “Dope Bitch” that really tied Mastermind together.

See the irony of Kanye continuing to work with Ross, a fellow artist who gets paid to attach his name to Maybach’s.  Meanwhile, Ye would “throw ’em some Maybach keys”.  But even with the given flaw, the duo produce tracks that actually keep us coming back for more.  This proven by what may be the albums best track- “Sanctified”, with Big Sean as the third musketeer.  Each verse and hook takes a break from the bloated and familiar MMG flare and glamour and I guarantee you will bob your head to Ross’s verse because he flows as if he were the king on the throne, to the point where you may miss the line that made me laugh out loud: “Felatio’s amazing, make grilled cheese for you, the best”.

Mastermind has Rick Ross at his least creative and most oblivious, unaware of reality and blinded by his own bogged down perception of a day in the life of a Don.  His music catches attention and holds to solid entertainment if paid attention to not-in-full.  Pay partial attention, and subconsciously handle his ridiculously oversized lyricism; but turn a direct eye, and focusing on such projects of the same caliber as Mastermind may pick you up, take you for a pretty fun yet mindless ride, and drop you off exactly where you just were, unchanged and unimpressed.
5.9/10

Undiscovered Gems: Get Yourself Acquainted To Sacramento’s Own Nate Curry And His Brilliant New Cut “You Go Crazy”

Undiscovered Gems: Get Yourself Acquainted To Sacramento’s Own Nate Curry And...

As Fall Approaches Daily Chiefers Returns With Another Round Of Frosted...