EBK JaayBo is rising 17 year old artist out of Stockton, California, and is starting to make some serious noise in the music industry. Showed to us by the legends over at Thizzler, EBK JaayBo recorded his latest project Letter 4 The Streets while he was on the run and was arrested 5 days prior to the project’s release date.

At the tender age of 17, JaayBo is easily one of the most promising acts in the California area and we’re looking forward to more projects in the future when he gets out. Until then, check out the content below. You’ll thank us later.

Here’s another smash by Bo.

Listen to the album below.

Undiscovered Gems: EBK Young Joc Is Up Now, Fuck Next 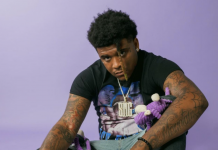