Sam Austins is an artist from Detroit, Michigan who has endured various hurdles during his path to fame. His journey began opening up for established acts like Playboi Carti and Vince Staples but was given an ultimatum upon graduating high school. Sam’s parents insisted that he figure his life out in the form of secondary education or enroll in the U.S Navy. By this point, Sam was steadfast on developing his promising music career and unfortunately was homeless for a  period of time as a result of it. He often stayed on the couches of people he knew and even had to sleep in his 2004 champagne Chevy Impala for a brief period. Sam continued to grind despite his financial situation, eventually fine-tuning his sound in his aunt’s attic. Several years later, Sam was able to find success in a deadly pandemic, inking a deal with APG and Atlantic Records. The resilient young man is back with a smooth Sir Chloe assisted single, “JOY FOR YOUTH”.

Sam came through with a groovy anthem for the youth. The soft vocals, hazy guitar riffs, and subtle drums accurately convey feelings of acceptance, comfortability, and the joy that can come from spending time with beloved peers. I can resonate with lines like,  “Breaking out the darkness, just looking for a spark” as I have gone through bouts in my journey to adulthood where I felt lost or not accepted. It has not been until recently that I have understood my passions and figured out the ways to best maximize myself for long-term success. I thoroughly enjoyed Sir Chloe’s part as well and the vocals honestly put me in a trance, complimenting the scenic landscape of the video. There are various shots in which the two artists are seen wandering a green field under dimly lit skies. There are also a couple of sick shots where Sam and Chloe can be seen brandishing a wooden sword, which may serve the symbolic purpose of battling the forces that hinder youthful discovery. The coolest scene in the video might be the shot where Sam is crouched down in grassy land singing his heart out, surrounded by people who were upside down in chairs. The visuals were calming and constantly fluctuating, akin to a good mushroom trip.

Sam will certainly continue to shine beyond this video as he has been featured on the June/July 2021 Vogue issue alongside musical companion, Sir Chloe. Sam has also received writing credit for Big Sean and Post Malone’s smash song, “Wolves”. Sam plans to release a project this fall titled, “HOMELESS STAR” in which he will dive into his financial hardships and the uncertainty that came in life from not knowing his purpose but understanding that he will eventually make his mark on the world. Check out Sam Austins‘s new single, “JOY FOR YOUTH” below. 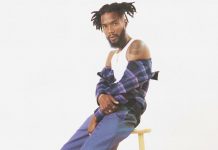 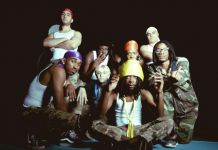